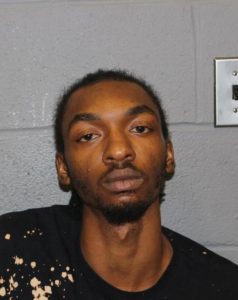 September 14, 2017 -Springfield- Hampden District Attorney Anthony D. Gulluni announced today the arrest and arraignment of Demetrius Moore, 26, of Springfield, for his suspected role in the murders of Chauncy Marshall, 31, and Warren Payne, 27, both of Springfield.

Moore was arrested in the early morning hours of Thursday morning by the Massachusetts State Police. Moore was the operator of a vehicle that was operating at a high rate of speed as well as running a red light.

During the course of the traffic stop the trooper on scene learned Moore was wanted on a murder warrant out of Springfield District Court. Moore was then taken into custody without incident and brought to the Springfield barracks.

Moore was wanted in connection with a fatal shooting that occurred at the Kickback lounge in Springfield on June 4, 2017. When officers from the Springfield Police Department arrived on scene three gunshot victims were located. Two of those victims, Mr. Marshall and Mr. Payne tragically passed as a result.

District Attorney Anthony D. Gulluni stated, “My sympathies to the victims and their families. I would like to thank the Springfield Police Department’s Homicide Unit for their work in identifying a suspect early on in this investigation and to the Massachusetts State Police for taking him into custody.” D.A. Gulluni went on to say, “My office will now seek to successfully prosecute this case in order to bring some justice to both the victims and their families.”

Demetrius Moore was arraigned today in Springfield District Court where he was held without the right to bail. The next date this case will be in court is on October 16, 2017.