HOLYOKE – On the final day of school, Holyoke High School seniors were given a simple message from officials with the Hampden District Attorney’s Office: you don’t want to see us again.

“It is extremely important  – especially the summer is coming on, you’re graduating and you have all these fun events – that you understand responsibility that you have to yourself, your family and friends and other people on the road to be careful in your car,” Gulluni said.

That responsibility means no driving while drinking or while on drugs, and not allowing anything to to take your eyes off the road.

Distracted driving is a catch-all term for a myriad of behaviors that could all lead to someone getting killed or injured, or arrested and prosecuted.

Driving under the influence of drugs or alcohol is prominent, but so too are texting, talking to passengers, or even adjusting the radio. Distracted driving is any behavior that causes the driver to not be giving full attention to the road.

“It is serious,” Gulluni said.

Simmons, the director of the Community Safety and Outreach Program, asked how many of the seniors know of someone who was involved in a fatal car crash. More than a dozen hands went up.

Simmons said the forum fits in with fits in with Gulluni’s philosophy of prevention before prosecution, he said.  His office makes an effort to reach out to area high schools about the dangers of distracted driving and the life-long consequences.

“We don’t want any of you guys behind the wheel for this, or to be a passenger. So we’re giving you some information.”

The forum featured the showing of a 19-minute video called “Stop the Swerve,” that features interviews with participants and photos from the scene of fatal accidents on I-91 in Springfield and on Bates Road. In each, the driver had been drinking and had allowed himself to be distracted.

Forsyth, who in his capacity as prosecutor for motor vehicle homicide cases, said he has in 16 years  gone to more than 100 scene where someone has died in an automobile crash, including one of his uncles, said none of the people in the room ever want to see him again in his professional capacity.

“Because either A: someone you love is dead, or B: you just killed someone,” he said. “It’s that simple.”

There have been and continue to be many warnings about driving while intoxicated, but not nearly as much emphasis about the dangers of driving while texting, he said. 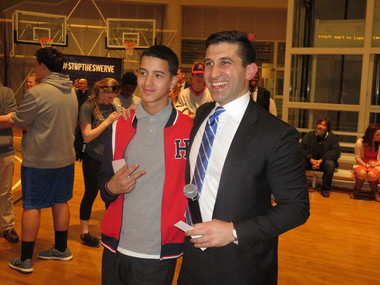 The contest showcases the dangers of drunk and impaired driving, for high school students.

Forsyth asked one student to use his phone to compose a text reading “I’ll be there in a few minutes,” and asked the others to time how long it took to type and send.

When the answer was four seconds, Forsyth used a tape measure to show how far a car traveling 40 mph can go in four seconds. It extended from the front up the auditorium, past row after row of students and out into the hall.

Forsyth said if this were an actual driver and an actual text, he could have potentially run over dozens of people while his eyes were off the road.

“You never know what will pop up in four seconds,” he said.