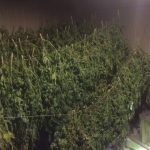 During the subsequent search of the residence, a sophisticated marijuana grow operation was discovered.  Recovered during the search was approximately 467 marijuana plants in various stages of maturity, a large amount of dried marijuana, growing paraphernalia, packaging materials and items related to drug distribution.

Halla was previously transported to Hampshire County House of Correction where he was held pending bail on motor vehicle charges.  He will face additional charges to include marijuana trafficking and cultivation. 11 Taft Road was a residence that was unlivable and its sole function was the cultivation and processing of marijuana.

Hampden District Attorney Anthony D. Gulluni stated, “We are focused on investigating, arresting, and aggressively prosecuting drug dealers and traffickers. It is they who profit from the scourge of addiction, which destroys lives, families, and communities. The involved agencies collaborated to remove a significant amount of illicit drugs off the streets. I thank the Hampden County Narcotics Task Force for its vigilance and a thorough and successful investigation.”