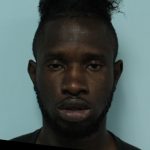 June 13, 2016 -Springfield, Mass- Hampden District Attorney Anthony Gulluni’s office reported today, Terrance Montgomery and Steven Keita are currently being held with the right to bail after being arrested on Friday.

Both Montgomery and Keita were levied with $25,000 cash bail for their roles in Friday’s public safety incident outside of the Springfield Juvenile Courthouse.  The judge subsequently revoked their bail on other open cases.