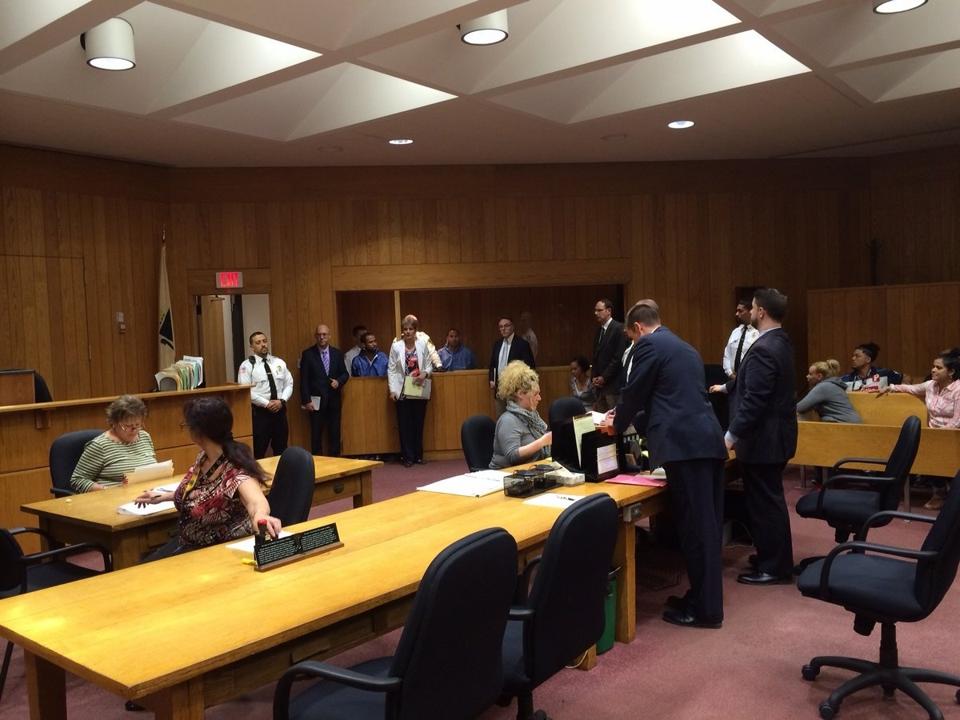 4.28.17 HOLYOKE – Jose Espada and Sammy Lozada, seated in blue behind glass in background, are arraigned on murder charges Friday in Holyoke District Court. Espada, Lozada and Madeline Garcia were ordered held without right to bail after pleading not guilty to murder, armed home invasion and assault and battery. Jack Flynn
By Patrick Johnson
May 01, 2017
HOLYOKE – The man killed during a Maple Street home invasion on Friday has been identified as Carlos Ramos of Holyoke, according to the office of Hampden District Attorney Anthony Gulluni.

Holyoke police responding to the scene found Ramos with a serious knife wound to the chest. Officers provided first aid until paramedics could arrive and take over. Ramos died a short time later at Baystate Medical Center in Springfield.

Sammy Lozada, 38, Jose Espada, 36, and Madeline Garcia, 34, all of Holyoke, are each charged with murder, armed home invasion and assault and battery.

At their arraignment Friday in Holyoke District Court, each denied the charges.

Each was ordered to be held without the right to bail while they await trial.

Gulluni spokesman James Leydon said it is not clear if Ramos was a resident of 372 Maple St. His last address on file was in Chicopee.

“I would like to express my sympathies to Carlos’s family and friends during this tragic time. My office’s Murder Unit will continue to work in partnership with the Massachusetts State Police Detective Unit assigned to my Office as well as the Holyoke Police Department towards a successful prosecution and justice for the victim and his family,” the statement read.

The death is the second homicide in Holyoke this year.