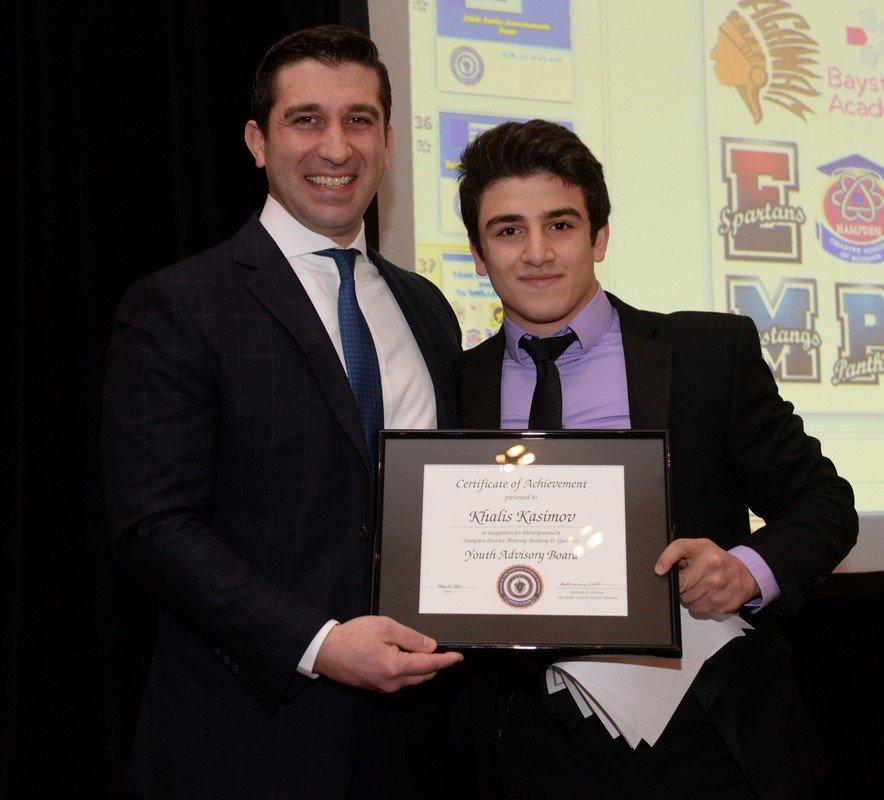 Dave Roback | droback@repub.com
By George Graham |
on May 11, 2017
SPRINGFIELD — Members of Hampden District Attorney Anthony Gulluni’s Youth Advisory Board gathered at the MassMutual Center Thursday morning to celebrate a year of hard work with their peers throughout the county.

Some of the fruit of that hard work, three public service announcements created by the nearly three-dozen members, were shown at the conference.

The videos focused on unhealthy relationships, the inappropriate use of social media and teen stress.

The nearly three-dozen students, representing 18 different high schools, met regularly with Gulluni and other advisors to discuss the many issues that youth face today and made presentations to their peers throughout the county.

“We go out to these schools, we create PSAs, we make a difference together as leaders and we get to help our county in the best way that we can,” said Benjamin McCoy, a Chicopee resident who attends Palmer High School.

“We had a lot on our plate and we handled it pretty well, in my opinion,” said Khalis Kasimov, who attends the Hampden Charter School of Science in Chicopee.

Each of the advisory board members spoke briefly before the crowd as they accepted their certificates. Many touched on how their work on the board taught them leadership skills and connected them with peers that they would otherwise never have met.

Gulluni, at the close of the conference, thanked all of those who helped make the successful year a reality.

“This is really a marquee program for us,” Gulluni said. “This really represents I think what we are all about and what we are trying to do.”

The district attorney clearly developed a bond with the students over the past year and they traded jokes and quips with each as they celebrated their successes.

“I think my only concern is that one of them, in eight or so years, is going to run against me for DA,” Gulluni said.

The event was attended by educators, law enforcement, and family members of the board members.

Brenda Tirado, mother of board member Leahana Malone, a student at Putnam Vocational-Technical High School, said she believes the students made a meaningful impact on their peers.

“I have seen such a change in her in terms of leadership,” Tirado said.

“It’s an excellent program,” said Melissa Bass, mother of David Bass, who is also a student at Putnam.