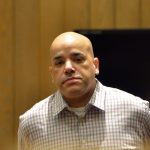 Hampden District Attorney Anthony D. Gulluni stated, “My sympathy is with the victim’s family, as I hope this verdict brings them closure and a measure of justice for their loved one.” D.A. Gulluni went on to say,” I thank the detectives of the Major Crimes Unit of the Springfield Police Department for their vigilance and I thank Assistant District Attorney Karen Bell for her great work and tenacity in securing this just result.”

Benjamin Martinez has been found guilty of murder in the first degree following a jury trial involving the homicide of Caridad Puente. Caridad, pregnant at the time, was brutally killed in her home on Taylor Street in Springfield in 2004.

Assistant District Attorney Karen Bell was the prosecutor assigned to the case.