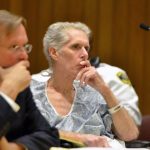 On November 4, 2016, the East Longmeadow Police Department obtained a warrant for Clifford Ahern, 59, of East Longmeadow, Ma. The warrant, for assault and battery on a family member, issued out of the Palmer District Court.

Officers located Mr. Ahern while he was operating his vehicle and signaled for him to stop. When pulled over, Mr. Ahern had a brief interaction with an officer, then sped away from the traffic stop and drove directly to his residence, with cruisers following behind him.

After exiting his vehicle and brandishing a knife, he turned towards the officers. He then charged at an officer and attacked him with the knife. The officer’s shirt was torn by the slashing of the knife. At this time, another officer discharged his gun striking Mr. Ahern. Ahern was transported to Bay State Medical Center in Springfield where he is listed in critical but stable condition. The officer involved in the attack suffered minor injuries.

Hampden District Attorney Anthony D. Gulluni stated, “The dedicated and professional officers who serve and protect in our cities and towns across Hampden County face potential danger each and every day they go out on patrol. This incident is an unfortunate reminder of this reality.” D.A. Gulluni went on to say, “This matter is under investigation by the Hampden District Attorney’s Office and the Massachusetts State Police Detective Unit assigned to it.”