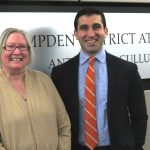 District Attorney Anthony Gulluni stated, “I proudly announce Kate’s promotion to Chief of Appeals. Kate has a long and accomplished history of public service and exemplary appellate work. I am exceedingly confident that Kate will lead our Appeals Unit with great skill and energy. The residents of Hampden County will be well served by Kate in her new role.”

Assistant District Attorney McMahon stated, “I am deeply honored that District Attorney Gulluni has entrusted me with this position. My team and I will continue to serve the office and the people of Hampden County with honesty, integrity, and a commitment to justice.”

Attorney McMahon joined the Hampden District Attorney’s Office in May, 2001, and will celebrate fifteen years in Hampden County on May 7, 2016. Her work as an ADA has been in appeals, which includes regular appearances before the Massachusetts Supreme Judicial Court and the Massachusetts Appeals Court, as well as post-conviction matters in superior court.

The Appellate Unit is responsible for: representing the Commonwealth when a defendant exercises their right to appeal his or her conviction. Handles interlocutory appeals, which are filed either by the Commonwealth or by the defendant during the course of a trial rather than after a conviction; Opposes defendants’ motions for a new trial and stays of execution of sentences pending appeal; Provides legal support to the trial prosecutors in murder prosecutions and other designated cases.