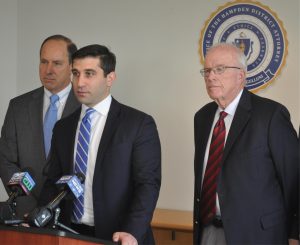 Hampden District Attorney Anthony D. Gulluni stated, “Governor Baker’s bill looks to update our current laws to keep pace with an evolving society and the challenges it presents to the criminal justice system. Principally, the package would give law enforcement essential tools in prosecuting dealers and traffickers who profit from addiction. Also, the Governor wisely attempts to strengthen the laws around the protection of witnesses, court staff, lawyers, and judges from intimidation, threats, and reprisal associated with their involvement in the justice system.”

Enhanced penalties are also part of the Governor’s proposal for those who cause a death from selling drugs. Presently, there are several prosecutions in Hampden County where defendants are charged with Manslaughter for their alleged roles in providing illegal drugs to individuals who have fatally overdosed.

“If enacted, this bill would allow for significantly enhanced penalties in cases where evidence provides a nexus between the victim and a dealer. This proposal, if enacted, sends a clear message to dealers that they can be held accountable — in a substantial way — for their actions”, stated Hampden District Attorney Anthony D. Gulluni.

The other vital piece of the Governor’s proposal is the protection of witnesses and other justice system participants by codifying intimidation and retaliatory conduct as a felony.

In response to this aspect of the proposal District Attorney Gulluni stated, “Many of our prosecutions are dependent upon courageous victims and witnesses testifying in open court. Governor Baker’s proposal offers critical protection for those who participate in the justice system, especially when their duties are complete and they attempt to resume a normal life. We must seek to protect the justice system and its participants to ensure fairness, equity, and public safety for people across the Commonwealth.”

D.A. Gulluni went on to say, “I applaud these efforts by the Governor and I encourage legislators to take up debate on this bill and give the Governor’s proposals every consideration.”