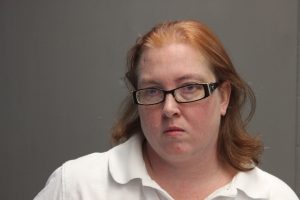 October 4, 2017 -Springfield- Hampden District Attorney Anthony D. Gulluni announced today the arrest of Shanna Sharples, 38, of Westfield. She has been charged with: Child Endangerment, Improper Disposal of a Body, and three counts of Obstruction of Justice.

On Thursday, May 5, 2017, Detectives from the Westfield Police Department contacted the Massachusetts State Police Detective Unit assigned to the Hampden District Attorney’s Office and advised they were looking into the possible birth and improper disposal of an infant.

The alleged suspect, Shanna Sharples, had checked herself into Baystate Noble Hospital reporting a miscarriage the previous day, May 4, 2017. The suspect reportedly arrived at the hospital in possession of biological tissue, which was consistent with what a woman who gave birth would have produced. A fetus or infant was not presented or found. Medical staff from Baystate Noble Hospital also contacted the Westfield Police Department when they observed signs the suspect had likely given birth to a twenty-four week to full-term baby. Because Sharples was suffering from severe bleeding, she was then transferred to Baystate Medical Center’s Wesson Women’s Clinic for further medical treatment.

Over the course of the investigation, detectives from the Westfield Police Department and the Massachusetts State Police Detective Unit spent several days searching through approximately 50 tons of garbage, fearing the infant was disposed in the trash, which had been picked up and transferred to the town dump the morning this incident was reported.

Detectives also searched extensively through construction dumpsters around the suspect’s home and numerous wooded and secluded areas in the vicinity.

Shanna Sharples was arraigned this morning in Westfield District and received $10,000 cash bail. Her next scheduled court date is November 3, 2017.