SPRINGFIELD — Moises Silva on Friday was sentenced to five years in state prison after pleading guilty to trafficking heroin in the amount of 36 to 100 grams.

Silva, 36, of 10 Huntington St., Springfield, had been charged with trafficking heroin in the amount of over 200 grams, but the charge was lowered as part of a plea agreement. 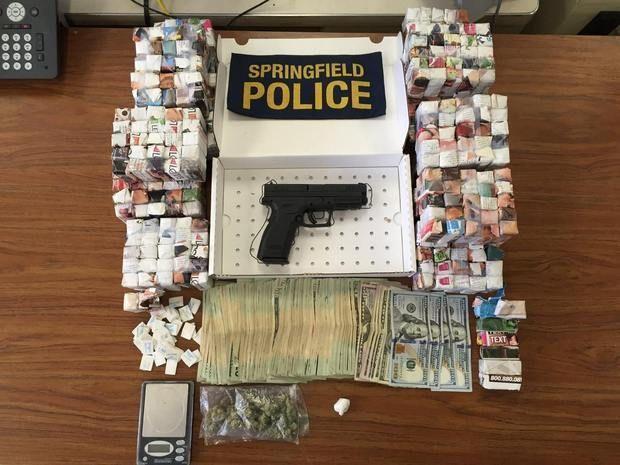 He also pleaded guilty to possession of cocaine with intent to distribute (subsequent offender), possession of a firearm with one prior violent offense and illegal possession of ammunition. He received sentences on those concurrent with the five years for heroin trafficking.

Silva, who was represented by Arthur J. O’Donald III, agreed to forfeit $11,212 seized when he was arrested. He has 449 days credit on his sentence for time spent in jail awaiting trial.

Springfield police seized close to 17,000 bags of heroin on Thursday night and arrested 3 men that are believed to be drug dealers.

Silva was arrested with Jeremy Crespo, 21, of Holyoke, and Jereiska Fontanez, 25, of 10 Huntington St.

Police said at that time their investigation led narcotics detectives to believe that the three were drug dealers and were responsible for delivering hundreds of bags of the narcotics to “street dealers” all over Western Massachusetts.

All charges against Crespo, who was represented by Nicholas J. Horgan, were dropped by the prosecution Friday.

Fontanez, who was represented by Daniel R. Bergin, had been charged with trafficking heroin in the amount of over 200 grams and other drug and gun offenses. She pleaded guilty Friday to reduced charges of possession of heroin and possession of cocaine. McDonough accepted the joint recommendation of prosecution and defense and continued the case without a finding with 18 months probation.

Assistant District Attorney Kerry Beattie said Silva was the target of a police investigation in May and June of 2016.

Police followed Silva, who was driving, and Crespo, his passenger, on June 16 and stopped the vehicle. Heroin and cocaine were found in a hidden compartment in the vehicle.

Police had a search warrant for Silva and Fontanez’s apartment. Several thousand bags of heroin were found in a closet, and more was in a drawer, Beattie said.

A 9 mm handgun and 15 rounds of ammunition were found in a closet.