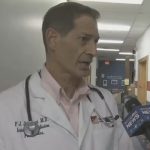 Hampden District Attorney Anthony D. Gulluni stated: “I would like to commend the grand jury for their service. I would also like to thank the Massachusetts State Police detectives assigned to my office and, in particular, Trooper Michael Martin, the Drug Enforcement Agency, the Insurance Fraud Bureau of Massachusetts and the F.B.I for their thorough investigation into this matter.” D.A. Gulluni went on to say, “Illicit issuing of opioid medications is a driving force behind the addiction epidemic. In battling the scourge of addiction, we will continue to aggressively go after those who wish to profit from it.”

The investigation centered around the time period of April 2015 thru May 2015 while Stirlacci was imprisoned in Kentucky on failure to pay child support. Allegedly, while imprisoned, narcotics were routinely being prescribed, through Miller, from his office on pre-signed prescription pads to patients who were not seen by a doctor. While the indictments centered on a four day period when 26 prescriptions and 2030 pills were issued, the investigation found that while imprisoned, a total 116 opiate prescriptions were issued accounting for 15,059 pills.

On February 9, 2016, Dr. Frank Stirlacci surrendered his license to practice medicine by signing a voluntary agreement not to practice. He had offices in both Agawam and Springfield.

Both will be arraigned in Hampden Superior Court in the near future.