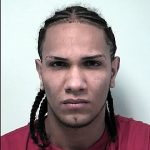 Brian Henriquez, 29, of Springfield, Ma, has been found guilty by a jury in Hampden Superior Court and sentenced to fifteen years in prison for assaulting a security guard, who was on his way into work at approximately 7:30 a.m. on March 4, 2015.

Hampden District Attorney Anthony D. Gulluni stated, “I thank and commend the Springfield Police Department and A.D.A Nina Vivenzio for their thorough and professional investigation and prosecution of this case.” D.A. Gulluni went on to say, “Keeping our streets safe in order to promote a positive quality of life for the residents of Hampden County is paramount to my administration.”

On March 4, 2015 at approximately 7:30 a.m. officers from the Springfield Police Department responded to the vicinity of Main Street and Liberty Street to a report of a fight involving a firearm. Upon arrival officers observed two security guards attempting to subdue Brian Henriquez. According to a witness, Henriquez began verbally abusing the victim, Norberto Garcia, while he was on his way into work. Mr. Garcia, a retired police officer, attempted to guide Henriquez away from the area but the verbal confrontation quickly escalated into a physical altercation. The altercation led to Henriquez gaining an advantage by biting Mr. Garcia on the nose and hands. Henriquez than saw Mr. Garcia’s personal firearm and pulled it from the holster leading to a struggle for the weapon. At this point a second security guard joined the struggle and assisted in securing the gun.

Officers arriving on scene attempted to detain Henriquez but he continued to violently resist being placed into custody. When officers were finally able to handcuff him and place him into their cruiser Henriquez began kicking the rear window as well as spitting at the officers.

As a result of this incident, Henriquez was found guilty on the following indictments: Assault and Battery, Illegal Possession of a Firearm, Resisting Arrest, and Assault by Means of a Dangerous Weapon. Brian Henriquez has been sentenced to a minimum of 15 years at MCI-Cedar Junction.

Upon conviction and pursuant to the statute that was employed by the prosecution, Mr. Henriquez faced enhanced penalties regarding his illegally possessing a firearm due to his three previous convictions involving violent crimes or serious drug offenses. The previous convictions stemmed from incidents involving the possession of drugs with the intent to distribute in 2006 and 2012 as well as an assault with a dangerous weapon in 2007, all occurring in the City of Springfield.