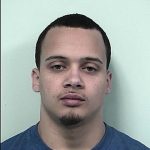 Sherad Therrien, 26, has been indicted by a Hampden County Grand Jury on the following counts: Murder, Armed Assault with Intent to Murder, Illegal Possession of a Firearm, and Unlawful Possession of Ammunition without an FID Card. Therrien will face enhanced charges on the indictments relating to the illegal possession of a firearm and possession of ammunition, due to previous convictions on assault by means of a dangerous weapon and carrying a firearm without a license for a previous incident in the City of Springfield on May 27, 2010.

Hampden District Attorney Anthony D. Gulluni stated, “I would like to commend both the Springfield Police Department as well as Assistant District Attorney Karen Bell, who is a member of the office’s Murder and Major Crimes Unit, for never giving up on this cold case. With indictments from the grand jury in hand, my office will now prosecute this case with vigor and an eye to justice for the victim and his family.”

The Springfield Police Department responded to the vicinity of 28 Westminster Street in the early morning hours of September 28, 2013, where they found the victim, John Alexander, 22, suffering from an apparent gunshot wound. He was immediately transported to Baystate Medical Center where he was pronounced deceased.

Sherad Therrien will be arraigned in the near future on the above listed charges in Hampden Superior Court. Therrien was found guilty in 2015 in U.S. Federal Court on gun and drug charges and is currently in federal custody.

Assistant District Attorney Karen Bell will be representing the Commonwealth in this case.