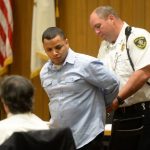 Dennis Rosa-Roman has been found guilty of murder in the first degree following a jury trial involving the homicide of Amanda Plasse. The incident took place in Amanda’s home at 73 School Street in Chicopee on August 26, 2011.

A jury in Hampden Superior Court found Rosa-Roman guilty after five hours of deliberation. A sentencing hearing is scheduled for 9:00 a.m. on Tuesday, July 12, 2016.

Assistant District Attorney Karen Bell was the prosecutor assigned to the case.