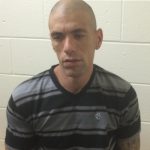 Hampden District Attorney Anthony D. Gulluni stated, “I would like to thank Troopers Sullivan and Blanchette of the State Police Detective Unit along members of the Massachusetts State Police Violent Fugitive Apprehension Section and members of the other local police departments for the exceptional investigative work that has led to this arrest. This is a great example of multiple law enforcement agencies combining forces to get a very dangerous individual off of our streets.”

The Massachusetts State Police Detective Unit (SPDU) assigned to the Hampden District Attorney’s Office has been assisting multiple local police departments in the search of a suspect.

On July 6, 2016, the Agawam Police Department contacted the SPDU for assistance in their investigation of a bank robbery. Based upon video evidence the identification of a suspect was made.

Based upon intelligence gathered during the course of the investigation arrest warrants were issued from the cities and towns of Agawam, Chicopee, Ludlow and West Springfield.

Members of the Massachusetts State Police, Agawam, Chicopee, Ludlow, Springfield, and West Springfield Police Departments started a wide search of the Western Massachusetts area for the suspect involved in the string of robberies.

During the course of the investigation it was determined the suspect was at a location just over the state line in Enfield, Connecticut.

While authorities where zeroing in on his location in Enfield, the suspect engaged the Springfield Police Department in a motor vehicle chase. The suspect was able to evade the police close to the Connecticut state line.

A short time later, members of the Enfield Police Department assisted by troopers Sullivan and Blanchette arrested the suspect at a Red Roof Inn.

Arrested was Joseph Richey, 35, of Springfield, Ma. Richey will appear in court today in Connecticut on drug charges. He will appear at a later date in Massachusetts on warrants out of Agawam, Chicopee, Holyoke, Ludlow, and West Springfield for charges relating to robberies in those communities.