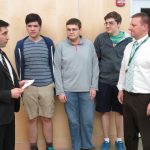 The first place award was presented to Ludlow High School in the amount of $10,000 to use in upgrading the school’s technological capabilities. Second and third place awards were also presented to second place Southwick Regional School and third place Pathfinder Regional Vocational Technical High School in the amounts of $2,500 and $1,000.  The awards stem from groups of high school students who submitted a winning public service announcement at District Attorney Anthony Gulluni’s #StoptheSwerve event in March at the Basketball Hall of Fame.

Hampden District Attorney Anthony D. Gulluni stated, “I am tremendously proud to be able to present these awards to Ludlow, Southwick and Pathfinder High Schools. All of the students involved did a superb job; the residents of Ludlow, Southwick and Palmer as well as Hampden County has a whole should be proud of their efforts. ”District Attorney Gulluni went on to say, “ Reaching our young adults about the dangers  of impaired, drunk or drugged driving while they are forming driving habits is imperative in making our communities safe places to live and work.”

Earlier this year, area high school students had the opportunity to create a PSA highlighting the dangers of impaired driving.  The thirty to sixty second entries were to be original, note the risks associated with drunk or drugged driving, and communicate messages about public safety.

The awards made to the winning schools can be used to improve technological equipment at their respective high schools.

The winning PSA titled The Mourning After has been playing on WWLP, Channel 22, as part of their public service announcements.