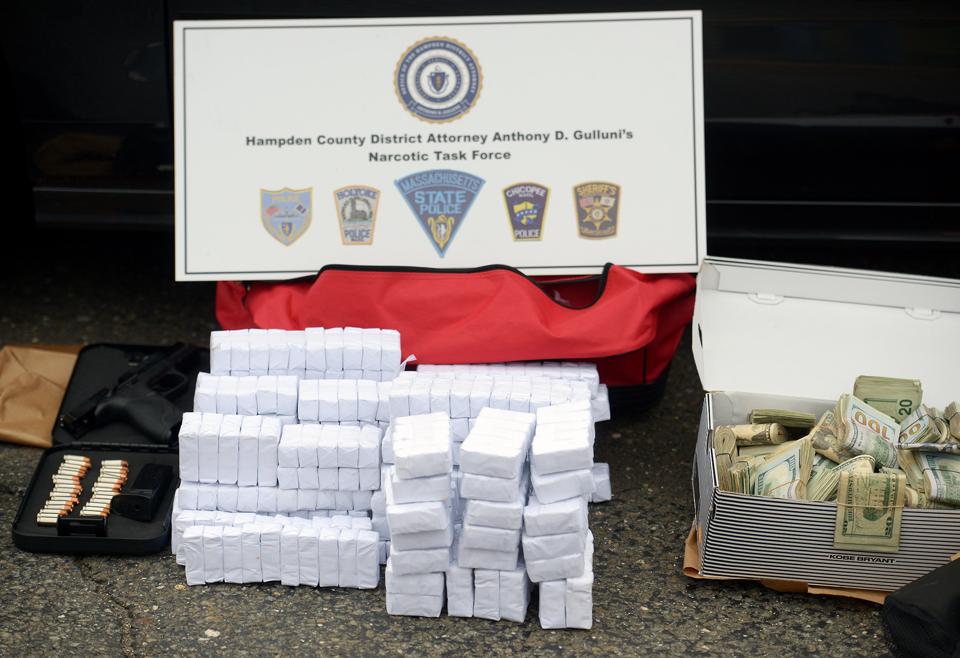 By; Greg Saulmon, Patrick Johnson
The Republican, on April 14, 2017

HOLYOKE – Holyoke Police and the Hampden District Attorney on Friday began releasing the names and charges for the more than a dozen suspects arrested as part of a narcotics raid.

The names of 16 men and woman and the charges against them were disclosed Friday morning.

The raid resulted in the seizure of 24,000 bags of heroin, $114,000 in cash, and three high-end sports cars that police say were being used in the distribution of drugs. They also found an unlawful handgun and a bulletproof vest.

Rodriguez was not among those arrested Thursday. The city announced on Friday morning she has been placed on leave pending an investigation.

The operation was the result of an investigation into heroin trafficking in Holyoke that was conducted by the Holyoke Police narcotics bureau and detectives with the Massachusetts State Police assigned to the Hampden DA’s office.

Hampden DA Anthony Gulluni said in a statement “The officers involved should be applauded for the dedication and professionalism in carrying out this complex investigation which culminated with these raids and arrest.”

He also said “We will continue to be relentless in our efforts to remove drug traffickers from our neighborhoods and prosecuting them to the fullest extent of the law.”

Holyoke Police Chief James Neiswanger said in a statement “The City of Holyoke is a safer place after the tremendous cooperative effort of our agencies to investigate and arrest numerous violent and dangerous subjects using handguns and dealing drugs in our streets. The people of Holyoke deserve safe neighborhoods and we are continuing our efforts to close down the street gangs and drug activity in Holyoke.”

The names and charges that were released Friday morning are as follows:

The DA’s office also announced Thursday’s arrests were related to the investigation following the arrests of four people in February on drug and unlawful weapons charges.