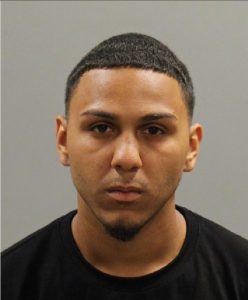 August 10, 2017 -Holyoke- Hampden District Attorney Anthony D. Gulluni announced today, Ivan Ramos, 19, of Holyoke, wanted in connection to two homicides that occurred in Holyoke on August 7, 2017 has turned himself to authorities at the Holyoke Police Department.

On Monday, August 7, 2017 at approximately 1:06 a.m., officers from the Holyoke Police Department responded to calls of shots fired in the area of 570 South Summer Street for a reported shooting.

Upon arrival officers discovered two individuals on a second floor rear porch at the above address. Responding emergency medical services arrived on scene and determined the victims to be deceased from apparent gunshot wounds. The victims have been identified as Colin Hodges, 31, and Arnaldo Rentas, 37, both of Holyoke.

Detectives from the Holyoke Police Department as well as the Massachusetts State Police Detective Unit assigned to Hampden District Attorney Anthony Gulluni’s Office arrived on scene and began their investigation into the apparent homicides.

It appears that both victims arrived at the second floor apartment. During their visit Ramos appears to have fired several shots at the victims, who then fled the scene on foot.

District Attorney Anthony D. Gulluni stated, “My sympathies to the victims and their families. I would like to thank the Holyoke Police Department, the Massachusetts State Police Detective Unit assigned to my office as well as Assistant District Attorney Max Bennett for their professional response to this tragic incident. D.A. Gulluni went on to say, “I would also like to thank members of the media and the public for widely publishing law enforcement’s search along with Ramos’ picture; as this could be a contributing factor in his decision to turn himself in.”

Authorities are still asking for the public’s assistance if you have any information pertaining to this investigation you are asked to call the Holyoke Police Department, (413) 533-8477, the Massachusetts State Police Detective Unit (413) 505-5993, or utilize Text-a-Tip by texting CRIMES (2-7-4-6-3-7) and type the word SOLVE into the body of the message followed by your tip.

Ivan Ramos is expected to be arraigned in Holyoke District Court. The investigation remains open and on-going.