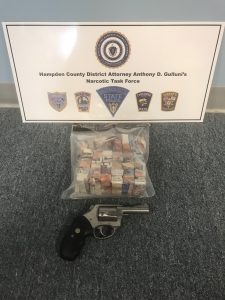 August 16, 2017 -Holyoke- Hampden District Attorney Anthony D. Gulluni announced today the arrest of Miguel Sanchez-Martinez, 26, of Holyoke on alleged charges of: Trafficking Heroin 36-100 grams, Possession of a Firearm without an FID, Improper Storage of a Firearm, and Possession of Ammunition without an FID Card. The investigation was carried out by the Hampden County Narcotics Taskforce and Berkshire County Narcotics Taskforce.

Based upon early intelligence, members of the Hampden County Narcotics Taskforce centered their investigation on 330 Mackenzie Street in Holyoke.

The suspect identified by the Berkshire Taskforce was found to have 2050 packets of heroin on him when arrested in Pittsfield after his return trip from Holyoke. 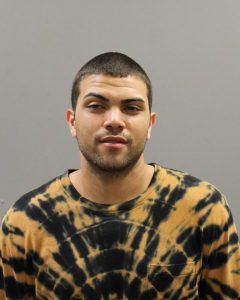 Once the suspect from Berkshire County was in custody; members of the Hampden Taskforce obtained a search warrant for 330 Mackenzie Street in Holyoke. During the search, members of the taskforce recovered: 2,020 bags of heroin, a handgun, and a box of ammunition.

Hampden District Attorney Anthony Gulluni stated, “I would like to thank all the agencies involved in this arrest and for their continued hard work in the interest of public safety. Specifically I would like to thank the Holyoke Police Department and the Massachusetts State Police Detective Unit Assigned to my office for their efforts. My office will now seek to prosecute as aggressively as the law allows in our continued fight to rid our streets of those who seek to profit from addiction.”

Miguel Sanchez-Martinez has been arraigned in Holyoke District Court. Bail was set at $10,000 cash.