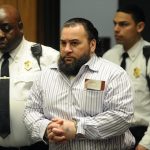 Friday, May 6, 2016 -Springfield, MA- Hampden District Attorney Anthony D. Gulluni today announced the guilty verdict and the sentence of life in prison without the possibility of parole for the assailant in the 2014 fatal stabbing of Angel David Morales of Holyoke, Ma.

Jorge Rodriguez-Nieves has been found guilty by a jury for his role in the 2014 fatal stabbing of Mr. Morales. He has been sentenced to life in prison without the possibility of parole.

The Jury found Rodriguez-Nieves guilty of murder in the first degree because the extreme atrocity and cruelty of the act.

Commenting on the conviction, Hampden County District Attorney Anthony D. Gulluni stated, “My sympathies to Mr. Morales’s family as I hope this favorable verdict brings a sense of justice to the victim’s family and friends.” D.A. Gulluni went on to say,” My thanks to the Holyoke Police Department, Massachusetts State Police Detective Unit assigned to my office and Assistant District Attorney Henry Rigali for their thorough investigation and successful prosecution of this matter. I also want to highlight and thank the civilian witnesses whose moral courage, commitment to justice, and cooperation made this conviction possible. For this case, and others to come, it is the partnership between law enforcement and the public that will help to ensure criminal justice and public safety. ”