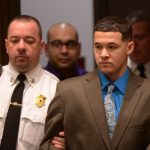 February 2, 2016 -Springfield, Mass- Both Leiva and Sosa have been found guilty of murder in the first degree following a jury trial involving the homicide of William Serrano.

The incident took place on the porch of 105 Grenada Terrace in Springfield on November 10, 2013. Leiva was socializing with his ex-girlfriend, her family and her new boyfriend, William Serrano. As relayed by the prosecution, Leiva left and returned with two men. At Leiva’s direction the two searched Serrano’s pockets and took his cell phone. Leiva then shot Serrano repeatedly.

Assistant District Attorney Eduardo Velazquez was the prosecutor assigned to the case.