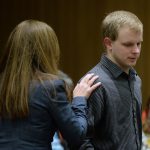 On February 6, 2015, Massachusetts State Police detectives assigned to the District Attorney’s Office were called to investigate the unattended death of Ms. Lillian Anderson, 16, of Westfield, MA. During the course of the investigation both the Westfield Police and Massachusetts State Police became aware of Lombard-Hawthorne as the potential individual who provided heroin to Ms. Anderson.

Hampden District Attorney Anthony Gulluni stated, “First, my thoughts are with the Anderson family during this difficult time. I would like to thank both the Westfield Police Department and the Massachusetts State Police detectives who are assigned to my office for their quick and thorough investigation leading to the arrest of a suspect.” D.A. Gulluni went on to say, “With this tragic loss of life, I would like to highlight the “Good Samaritan Law”, which ensures that those who call 911 to report an overdose for themselves or others will not be charged with the possession or use of opiates. In addition, Naloxone or “Narcan”, the drug that can reverse the effects of an opioid overdose, is available over the counter in most pharmacies.”

After the arrest of Lombard-Hawthorne by the Westfield Police Department, a subsequent search of his car yielded several bags of heroin leading to possession charges. The investigation is ongoing.

Seth Lombard-Hawthorne is scheduled to be arraigned Monday in Westfield District Court.