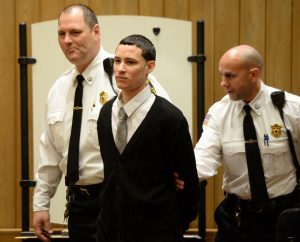 SPRINGFIELD — Michael Rodriguez on Wednesday was found guilty of second-degree murder in the fatal shooting of Julian Cartie in 2009 in Springfield.

Hampden Superior Court Judge John A. Agostini set sentencing for April 19, when Cartie’s family members and friends — many of whom have attended the whole trial — will give victim impact statements to the judge.

Assistant District Attorney Melissa Doran told the jury in her closing arguments Wednesday that Rodriguez should be convicted of first-degree murder under the theories of premeditation and extreme atrocity and cruelty.

“Ladies and gentlemen, this was not self-defense,” she told the jury. “This was murder.”

Defense lawyer David Rountree told jurors in his closing argument that Rodriguez acted in self-defense, saying Cartie and the two men with him “were going to beat the crap” out of him.

Cartie, 25, of New Britain, Connecticut, was fatally shot in the early morning of Feb. 22, 2009, after the clubs closed in downtown Springfield. Cartie was scheduled for deployment with the Connecticut National Guard to Iraq later that year.

Verdict Michael Rodriguez murder trial
Rodriguez, 32, of Holyoke, was charged with murder in Cartie’s death, which happened at State and Main streets. He was arrested by police and federal agents in Bridgeport, Connecticut, in December 2014.

The break in the cold case came with information through a message to Text-A-Tip that led police to Jacinda Matias, then girlfriend of Rodriguez and the person who was driving the car in which Rodriguez was riding when the shooting happened.

Former Massachusetts medical examiner Dr. Joann Richmond testified the gunshot wound to the right side of the victim’s heart and right lung would have caused death quickly. There were three gunshot wounds to his torso, one to his elbow and one to his hand.

She said the appearance of the wound on Cartie’s hand meant he was shot at close range.

Doran said Rodriguez killed Cartie because Rodriguez, who did not know Cartie, felt disrespected because Cartie’s friend yelled to the women in Rodriguez’s car.

Both Doran and Rountree played parts of a surveillance video in order to support their arguments. The video doesn’t show the shooting but shows the time leading up to it and the time after, when Cartie comes back into the frame and collapses.

Rountree said Rodriguez was backed into his own car door and thought if he drew a pistol and racked it, it would stop Cartie and the other two men from coming closer to him.

“We reserve the right to defend ourselves when and if we are attacked,” Rountree said.

Doran said the story told by the defendant on the stand didn’t ring true.

“He (Rodriguez) had plenty of time to get back into the car if he wasn’t looking for trouble as he told you,” she said.

She said the video showed Cartie did not charge toward Rodriguez, as the defense arged, but Cartie walked.