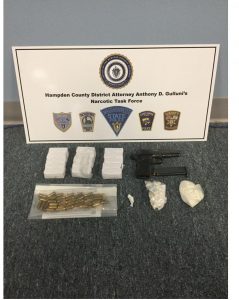 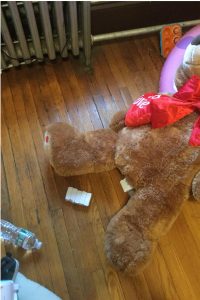 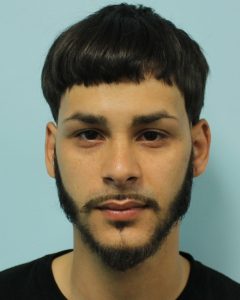 April 26, 2017 -Springfield- Hampden District Attorney Anthony D. Gulluni announced today the arrest of Joshua Santiago, 22, of Springfield, Mass, who suspected of narcotics trafficking in the City of Springfield. In addition to sei zing 750 bags of heroin, officials confiscated a semi-automatic pistol and 44 rounds of ammunition.

After a lengthy investigation into the trafficking of heroin in the City of Springfield the Hampden County Narcotics Task Force (HCNT), which consists of: The Massachusetts State Police assigned to Hampden District Attorney Anthony D. Gulluni’s Office, the Hampden County Sheriff’s Department and the Springfield, Holyoke and Chicopee Police Departments obtained a search warrant for 66 Fort Pleasant Street, Apt 4L in Springfield.

The search warrant was executed early this morning by members of the taskforce. Upon entering the residence officials located Santiago in bed with heroin and the firearm located next to him. Santiago was taken into custody by Massachusetts State Police Troopers and the Springfield Police Department.

The 750 bags of heroin were recovered inside a brown teddy located in a child’s bedroom.

Hampden District Attorney Anthony D. Gulluni stated, “This is tremendous work by the Hampden County Narcotics Taskforce. The officers involved should be applauded for the dedication and professionalism in carrying out this investigation.” D.A. Gulluni went on to say, “We will continue to be relentless in our pursuit of taking traffickers out of our neighborhoods and aggressively prosecuting them to the fullest extent of the law.”

Joshua Santiago is expected to be arraigned in Springfield District Court.