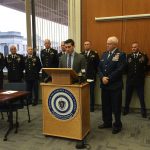 The program will allow the Hampden County District Attorney’s Office and Massachusetts State Police in Hampden County to utilize Massachusetts National Guard and Department of Defense resources in support of the Hampden District Attorney’s Office’s efforts in fighting drug trafficking and distribution in this region. This partnership of federal and local resources is the first of its kind, and is likely to serve as a model for other jurisdictions in the future.

Hampden District Attorney Anthony D. Gulluni stated, “I am very proud to announce this partnership with the Massachusetts National Guard. This is a unique program that will enhance our resources in combating drug trafficking and distribution here in Hampden County and across the Commonwealth. D.A. Gulluni went on to say, “Now including enlisting the support of the National Guard, I will continue to employ all resources available to support public safety here in Hampden County. ”

Major General L. Scott Rice, The Adjutant General of the Massachusetts National Guard stated, “This partnership will be mutually beneficial as it allows for an exchange of knowledge and facilitates the development of invaluable relationships to help reduce illegal drug traffic in Hampden County.”