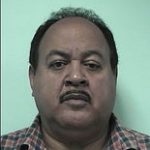 Gonzalez was arrested November 3, 2014 after injuring three teens in a cross walk at the intersection of Chestnut Street and Montmorenci Street in the North End of Springfield. All three children suffered serious injuries including one child being in critical condition for days after the accident.

District Attorney Anthony D. Gulluni stated, “I would like to thank the Springfield Police Department and the Massachusetts State Police for the exemplary investigation of the accident which enabled Assistant District Attorney Melissa Doran to present and argue a strong and comprehensive case on behalf of the victims.”

Assistant District Attorney Melissa Doran stated “The children involved in this case should be commended for their brave testimony that required them to recall the traumatic events. All of them sustained serious and painful injuries they are still coping with today.”