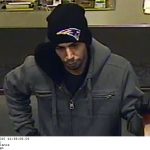 December 11, 2015 -Wilbraham, Mass- The Wilbraham Police Department along with the Massachusetts State Police assigned to Hampden District Attorney Anthony Gulluni’s Office is seeking the public’s help in identifying the man authorities believe to be responsible for robbing the Polish National Credit Union at 2002 Boston Road Wilbraham. If anyone recognizes this individual please call the Wilbraham Police Department (413) 596-3837 or utilize Text-a-Tip; text “Crimes” or 274637, and begin the message with “Solve.” When sending in a tip, the sender should include the name of the community where the tip is relevant.