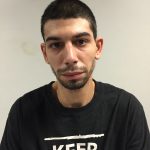 December 12, 2015 -Wilbraham, MA- The Wilbraham Police Department would like to thank the public and the media for their assistance in providing information that has led to the arrest of a suspect in yesterday’s bank robbery. The robbery occurred at the Polish National Credit Union at 2002 Boston Road in Wilbraham. Arrested was Frank Petrolati, 26, of Ludlow, MA.

After the suspect’s picture was featured prominently by several news organizations calls began to stream into the Wilbraham Police Department. Once the subject was identified an arrest warrant was obtained and the Ludlow Police Department was contacted to assist in the apprehension of the subject.

The Wilbraham Police Department, assisted by the Massachusetts State Police Unit assigned to Hampden District Attorney Anthony Gulluni’s Office has been working this case aggressively since yesterday and has quickly removed a dangerous individual from our community.

Hampden District Attorney Anthony Gulluni stated, “This was a great team effort by the Wilbraham, Ludlow and Massachusetts State Police. The swift apprehension of this subject will be followed by a thorough and aggressive prosecution. I would like to commend and thank the public and members of the media for their assistance in bringing the suspect to justice.”