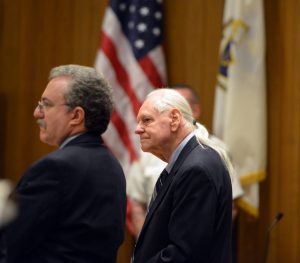 Photo from: The Republican

Honcsh was found guilty of first degree murder for the killing of his then wife Marcia Honsch. Marcia’s body was found on October 6, 1995 in the Tolland State Forest and had been a cold case until 2014.  Robert Honsch disappeared shortly after Marcia’s disappearance until being discovered by authorities to be living in Ohio under an assumed name with a new wife and three children.

It is expected that Robert Honsch will also stand trial in Connecticut for the murder of Elizabeth Honsch, the daughter of Marcia and Robert. Her body was discovered on September 28, 1995 behind a shopping area in New Britain Connecticut.

Hampden District Attorney Anthony D. Gulluni stated, “My sympathy remains with Marcia and Elizabeth’s family; however, I hope this verdict brings them some closure to this long process of criminal justice, and a feeling that, indeed, justice has been served.” D.A. Gulluni went on to say, “I would like to thank the many law enforcement agencies involved for their incredible steadfastness and commitment to justice through this very lengthy and, at times, frustrating investigation. I would also like to thank and commend Assistant District Attorney Karen Bell for her tenacity and superb skill in winning this hard-fought conviction.”