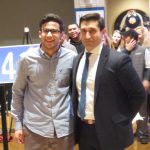 SPRINGFIELD, Mass. (WWLP) – Hundreds of teens, parents, law enforcement officers and those impacted by impaired driving crowded the Basketball Hall of Fame, Thursday night, for the 2nd annual “Stop the Swerve”. The event demonstrates the dangers of driving under the influence.

Hampden District Attorney Anthony Gulluni hosted the event. He said, “This is a great opportunity to talk about and understand the dangers of impaired driving in an engaging and educational setting,”

There were several games and interactive activities, like driving simulators with impairment goggles, to show the real dangers of impaired driving.

Ann Savery-Emo, whose daughter was killed in an impaired driving accident, told 22News, “You don’t realize how quickly life can be taken from you. It happens in a split second, and you know you have no control over it. You know, that’s what bothers me the most, I just had no control. I couldn’t help her. I couldn’t save her.”

Law enforcement hope this event makes people think twice. “It just takes that one night, where you think you’re okay and you might not get home alive,” said Massachusetts State Trooper Tom Sullivan. “You could be pulled over by an officer and end up getting arrested, and that could affect your work, it could affect a lot of things. It’s really important to try to keep people from doing the wrong thing.”

The Centers for Disease Control and Prevention reports that 28 people die in alcohol related crashes every day.

According to Jim Leydon from the Hampden DA’s office, winners of the PSA and billboard challenges were announced during the event, and received grant money to improve technological equipment at their schools. He said high school students were asked earlier in the year to create public service announcements and billboards that highlighted the dangers of impaired driving.