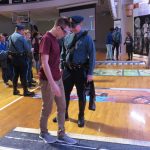 The event, held at the Basketball Hall of Fame in Springfield, was designed to educate area youth about the perils of impaired driving and included a slew of interactive activities and educational opportunities.

One of those opportunities was the chance to talk to Massachusetts State Troopers and other law enforcement officials, who were present to discuss impaired driving and the psychological and physical effects of intoxicants.

Teens also had a chance to play a drunken driving simulator game, and to try out special goggles meant to simulate the experience of being inebriated. While wearing the goggles, students attempting to do physical activities like play catch, walk in a straight line, or shoot hoops.

The big event of the night, however, was a short film and billboard contest involving entries from area high school students–all of whom had the opportunity to create public service announcements (PSAs) and billboards earlier this year that focus on the dangers of impaired driving.

The night also included a viewing of all of the films before the winners of the contest were officially announced.

The PSA winners were as follows:

The first place video, “More Than Yourself” by Jake Wieners, is also expected to air on 22News over the next month.