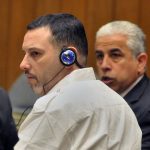 April 6, 2017 -Springfield- Hampden District Attorney Anthony D. Gulluni announced today the decision by the Massachusetts Supreme Judicial Court which upheld the conviction of Benjamin Sanchez for his role in the 2009 homicide of Ms. Ana Cruz.

Hampden District Attorney Anthony D. Gulluni stated, “I am pleased to announce the affirmation of this 2012 murder conviction. The dedicated and commendable work by the office’s appeals unit, headed by Chief of Appeals Kate McMahon, is clear in this decision. Specifically, I would like to thank Assistant District Attorney Bethany Lynch for representing the Commonwealth in this case.”

The decision states, “The defendant argues also that there were mitigating facts in this case that warrant exercise of our authority to reduce the degree of guilt to manslaughter or, in the alternative, murder in the second degree. We have carefully reviewed the entire record pursuant to our duty and discern no reason to order a new trial or to reduce the conviction to a lesser degree of guilt.”