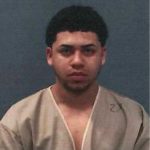 On Monday, April 10, 2017, at approximately 12:53 p.m., the West Springfield Police Department responded to a report of a woman shot at an apartment located at 25 Highland Avenue. First responders arrived on scene and located the victim who appeared to have a gunshot wound to her head.

During the course of the investigation, intelligence was provided which led authorities to seek a suspect in connection with the fatal shooting of Ms. Delilah Santiago, 18, of Holyoke.

Through the course of the investigation, authorities became aware of the suspect’s whereabouts. Based on intelligence gathered throughout the day, law enforcement officials apprehended the suspect at Bradley International Airport, with the assistance of the Connecticut State Police, after they confirmed the suspect had purchased a ticket with a destination of San Juan, Puerto Rico. Arrested in connection with the fatal shooting was Roberto Santiago, 19, of West Springfield.

Hampden District Attorney Anthony D. Gulluni stated, “This was a tragic incident that resulted in a young woman senselessly losing her life. My sympathy and thoughts are with the victim’s family and friends. This quick arrest comes as a result of the constructive collaboration between the Massachusetts State Police Detective Unit assigned to my office, the West Springfield Police Department, and members of my office’s Murder and Major Felonies Unit, especially Assistant District Attorney Max Bennett. I thank them all for their great work. This cooperation will continue as my office now focuses its effort on a successful prosecution and justice for the victim and her family.”

Roberto Santiago will be arraigned in Springfield District Court.