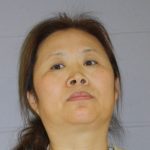 December 21, 2016  -Springfield, Ma- Chun Nu Li, 50, of Agawam, Ma who has been arrested on the suspicion of violating Massachusetts General Law, Trafficking of Persons for Sexual Servitude was arraigned today in Westfield District Court.

Hampden District Attorney Anthony D. Gulluni stated, “Human trafficking is an especially detestable crime, which preys on vulnerable people for the financial profit of the perpetrator. The Hampden District Attorney’s Office and its law enforcement partners are committed to stopping this form of exploitation and firmly applying the law to these offenders.”

During the search two victims of human trafficking were identified, interviewed and reunited with family with the assistance of victim witness advocates in the Hampden District Attorney’s Office.

Based upon the investigation an arrest warrant was issued for Chun Nu Li on two counts of Trafficking Persons for Sexual Servitude. Chun Nu Li was apprehended on Wednesday, December 14, 2016 by New York State Police in Flushing, NY. After signing a waiver of extradition, she was returned to Massachusetts on Tuesday, December 20, 2016 by Massachusetts States State Troopers assigned to the Hampden District Attorney’s Office.

At her arraignment today, the prosecution recommended the agreed upon bail for Chun Nu Li’s which was set at $1,000,000 cash with the conditions of: Surrender her passport and any passport ID and not to seek a replacement, notify probation if change of address or mail information, not to leave the State of Massachusetts unless probation and the Judge approves, Sign waiver of rendition, GPS monitoring if bail is posted, No abuse, threats or violence against any of the victims, or any of the Commonwealth’s witnesses, no contact with any of the victims, stay away from the Feedings Hills Spa massage parlor. Her next scheduled court date is January 20, 2016.