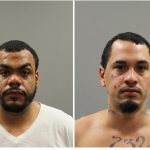 On February 8, 2017 at approximately 7:51 p.m. the Holyoke Police and Fire Departments along with paramedics responded to the area of 591 High Street for a report of an unconscious man lying on the sidewalk.  Upon arrival, first responders observed an unconscious individual who they transported to Holyoke Hospital.  He was later transported to Baystate Medical Center for a serious injury which was not apparent at the scene.  At the time it appeared the individual’s condition was related to a medical issue but it was later reported to the Holyoke Police Department that the individual may have been the victim of a robbery.

In the early morning hours of February 9, 2017 at approximately 2:00 a.m. the Holyoke Police Department contacted the Massachusetts State Police Detective Unit assigned to Hampden District Attorney Anthony D. Gulluni’s due to the severity of the victim’s injuries.

Early in the investigation law enforcement was able to identity two of the three individuals who they believed to be responsible for assaulting the victim. On the morning of February 11, 2017 arrest warrants were obtained and executed by Massachusetts State Police detectives and members of the Holyoke Police Department for the two identified individuals.

On February 14, 2017, the victim, Mr. Adam Rei, 25, of Springfield, Mass passed away. The three suspects will now face charges relating to his murder.

District Attorney Anthony D. Gulluni stated, “I would like to express my sympathies to Mr. Rei’s family and friends on their loss.” District Attorney Gulluni went on to say, “I would like to thank the Holyoke Police Department and the Massachusetts State Police Detective Unit assigned to my office for their quick action and hard work that led to these arrests. I and my office’s Murder and Major Felonies Unit are working together with detectives towards a successful prosecution and justice for the victim and his family.”

All three suspects will be arraigned in Holyoke District Court.