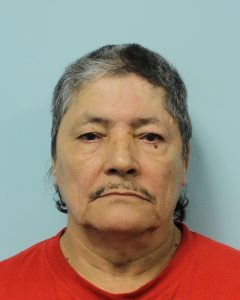 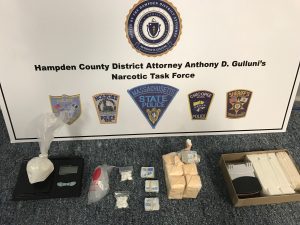 April 28, 2017 -Springfield- Hampden District Attorney Anthony D. Gulluni announced today the arrest of Genaro Hernandez, 64, of Springfield, Mass, who is suspected of narcotics trafficking in the City of Springfield. In addition to the arrest, law enforcement officials seized 340 bags of heroin, 26 grams of cocaine, along with 40 prescription pills packaged for sale.

After an investigation into the trafficking of heroin and cocaine in Springfield, the Hampden County Narcotics Task Force (HCNT), which consists of: The Massachusetts State Police assigned to Hampden District Attorney Anthony D. Gulluni’s Office, the Hampden County Sheriff’s Department and the Springfield, Holyoke and Chicopee Police Departments obtained a search warrant for 500 Hancock Street, apt. F1

The search warrant was executed early this morning by members of the taskforce and the Western Mass Gang Taskforce. Upon entering the residence officials located Hernandez and took him into custody without incident. Recovered during the search were the aforementioned illicit narcotics along with various paraphernalia used in the packaging, transport, and sale of drugs.

Hampden District Attorney Anthony D. Gulluni stated, “I would like to thank the Hampden County Narcotics Taskforce and the Western Mass Gang Taskforce. We continue our very constructive partnerships with agencies at all levels, and do so with the aim of improving public safety in this region.” D.A. Gulluni went on to say, “My office and its law enforcement partners will continue our effort to remove drug dealers and traffickers from the neighborhoods of Hampden County and prosecuting them to the fullest extent of the law.”