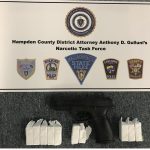 November 23, 2016 -Springfield, MA- Hampden District Attorney Anthony D. Gulluni announced today the arrests of Edwin Santos, 27, listed as homeless at the time of his arrest and Ramon Rivera, 24, of Chicopee, Ma after an investigation into the distribution of heroin in the City of Holyoke by the District Attorney’s Hampden County Narcotics Taskforce.

Hampden District Attorney Anthony D. Gulluni stated, “I would like to thank the members of the Hampden County Narcotics Task Force for their professional, thorough, and successful investigation leading to this arrest. We are focused on investigating, arresting, and aggressively prosecuting drug dealers and traffickers. It is they who profit from the scourge of addiction, which destroys lives, families, and communities.”

An investigation commenced, once law enforcement became aware of Edwin Santos as 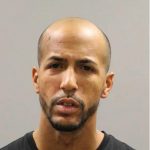 On Tuesday November 15, 2016 members of the District Attorney’s Hampden County Narcotics Force attempted to arrest Santos on the warrant but he fled into a waiting vehicle.

Santos was observed as he was operating the Honda sedan on Clayton Street in the area of Homestead Avenue in Holyoke. He again tried to elude police by striking an undercover vehicle with the vehicle he was operating.  Santos then fled on foot from the Honda, leaving the passenger Ramon Rivera, who was taken into custody without incident. Officers caught up with Santos who violently struggled with officers before being taken into custody. Both subjects were transported to the Holyoke Police Department for booking.

Recovered from the Honda were approximately 460 bags of heroin wrapped and ready for sale on the street.

Edwin Santos was arraigned on November 17, 2016 in Holyoke District Court. As a result of this incident he is facing additional charges of: Drug Possession of a Class A Substance (Heroin), Drug Possession with the Intent to Distribute, Class A Substance (Heroin), Assault with Intent to Maim, Drug Violation Near a School or Park, Malicious Destruction of Property greater than $250 and Operation of a Motor Vehicle with a Suspended License. Pursuant to the District Attorney’s request, bail was set at $100,000 and he is currently in custody. He is scheduled to be back in court on December 15, 2016 for a pre-trial conference.