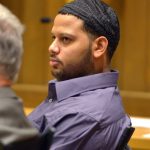 Rivera has been found guilty of second degree murder following a jury trial involving the homicide of Angel Llorens. The incident took place in Springfield on May 22, 2013 over a dispute involving a sticker of an illegal street racing team.