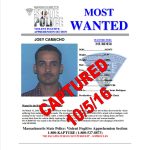 On March 17, 2005 detectives from the Holyoke Police Department and the Massachusetts State Police Detective Unit assigned to the Hampden District Attorney’s Office as well as the Massachusetts Crime Scene Services responded to the scene of a gunshot victim on Beacon Street in Holyoke at approximately 12:32 a.m.

Upon arrival and in response to the initial report of a gunshot victim, officers from the Holyoke Police Department, found the victim lying on the ground in what appeared to be critical condition. Officers immediately began administering medical assistance until medical emergency response personnel arrived on scene. The victim was transported to Baystate Medical Center where he was pronounced deceased. He was identified as Jesse Rosario, 25, of Holyoke, Ma.

The ensuing investigation identified Joey Camacho, 29 at the time and from Springfield, Ma, as suspect in the murder of Jesse Rosario. Law enforcement then began a search for Camacho but, in spite of several leads on his whereabouts, it yielded no results.

The State Police Violent Fugitive Apprehension Section (VFAS) was asked to assist in locating Camacho, who was placed on the Massachusetts State Police Most Wanted List in October 2005.

Earlier this year, their investigation revealed that Camacho was possibly using the alias of Gerald Torres, and that he may have been stopped under that name for a motor vehicle violation in Miami and arrested for operating after license suspension.

Following his booking and release pending a court appearance, investigators determined that Torres’ fingerprints and those of Camacho were the same.

When Camacho appeared (as Torres) at a Miami courthouse Wednesday for his scheduled court appearance, members of the US Marshals Florida Regional Task Force were conducting surveillance of the facility. After observing Camacho, Task Force members converged on him and placed him under arrest. He was charged as a fugitive from justice.

Hampden County prosecutors will work with Florida counterparts to arrange Camacho’s rendition to Massachusetts to answer for Jesse Rosario’s homicide.

Hampden District Attorney Anthony D. Gulluni stated, “The apprehension of this suspect is a testament to the dedication and professionalism of all agencies involved. I would like to thank the US Marshals District of Massachusetts Fugitive Task Force, Massachusetts State Police Violent Fugitive Apprehension Section, the Massachusetts State Police Detective Unit assigned to my office as well as the Holyoke Police Department for their work in identifying and apprehending the suspect. With the effort and skill of these agencies, we can now work towards justice for Jesse and his family.”

“The United States Marshals Service remains dedicated to assisting our State, Local and Federal Law enforcement partners with tracking down and arresting violent fugitives who flee the jurisdiction to avoid prosecution said U.S. Marshal John Gibbons.”  “I commend all of the agencies involved for their unwavering commitment with bringing this individual to justice after over a decade on the run.”

State Police Colonel Richard D. McKeon added: “Once again I am awed, but not surprised, by the superb work done by our Violent Fugitive Apprehension Section and our partners at the US Marshals Service in finding criminals who are trying very hard not to be found. They, along with our State Police Detective Unit in Hampden County, DA Gulluni and his office, and Holyoke Police, never forgot Jesse Rosario and never tired in their pursuit of his killer.”

Holyoke Police Chief James Neiswanger stated, ““I’m glad this suspect can be brought to justice to answer for this heinous crime.”