$27,000 to be Granted to Local Police Departments to Assist in Drug 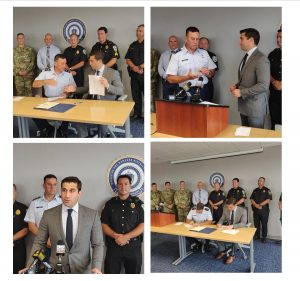 September 20, 2018 -Springfield- Hampden District Attorney Anthony D. Gulluni and The Adjutant General of the Massachusetts National Guard, Major General Gary W. Keefe, are set to renew a memorandum of understanding that will extend the National Guard’s Counterdrug Program here in Hampden County through the partnership with District Attorney Gulluni.

The Hampden District Attorney’s Office was the first in Massachusetts to utilize this program when it was announced back in December of 2015.

Hampden District Attorney Anthony D. Gulluni stated, “I am proud to announce the extension of this program under the leadership of Major General Keefe. This program has been a valuable tool in our extensive efforts to keep our citizens safe from drug dealers and traffickers who endeavor to profit from the devastation of addiction.”

In addition to the MOU signing, the National Guard, through the Hampden District Attorney’s Office, will present a total of $27,000.00 to the Springfield, Chicopee, Holyoke, and Ludlow Police Departments to purchase equipment to enhance their drug enforcement capabilities.  District Attorney Gulluni commented, “This further shows the commitment of my office and the National Guard to support and assist police departments in their efforts to ensure citizens’ safety and to curb the opiate epidemic. This money will assist them in this fight.”