McGarrigle of Holyoke read that a drop-off box was being set up at the mall. So he loaded some bags with unwanted medications that he and his wife had had lying around the house for the last few years and headed off.

Finding the box in the mall on the lower level near the Sears entrance was simple he said. But finding Hampden County Sheriff Nick Cocchi, District Attorney Anthony Gulluni, a dozen or so of their respective staffs, members of the media was unanticipated, he said.

And all of them loo 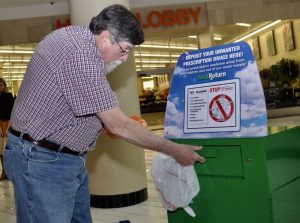 ked on with interest as McGarrigle, the first member of the public to arrive, began placing his old medication, some 30 to 40 pill bottles, into the box.

None of this was what he expected, he said. “Absolutely not.”

Gulluni and Cocchi were present to call attention to the county-wide medication disposal system that over the year has helped collect more than a ton of old and unwanted medication.

For the remainder of the day, a drop-off box was set up at the mall and members of the public were invited to make use of it.

Cocchi said that, since September, more than a ton of unwanted medication has been dropped off.

“We’ve received 2,788 pounds of unwanted materials from medicine cabinets and from around the house,” he said. “We want to double that next year.”

Gulluni and Cocchi each praised the drop-off boxes as critical in the long-term process of combating opioid addiction in the county. Many people who become addicted to heroin start off by using and abusing by-prescription medication found in a typical household medicine cabinet.

That ultimately is why McGarrigle wanted to get rid of his supply.

“We got grandchildren. We don’t want them getting a hold of it,” he said.

Prescription medication “falling into the wrong hands can be a breeding ground for addiction,” Gulluni said.

“This is an important effort in attacking the addition issue the county is facing,” he said. “We’re getting these drugs off our streets and out of the hands of young people.”

Gulluni said that in the overall fight against addiction, it is very important for people to dispose of medications responsibly.

“These drop-off boxes are a very good way to do it,” he said.

All medication seized in the boxes is delivered to the Sheriff’s Department, which in turn delivers it to Conveta Springfield, a medical incineration firm in Agawam, for disposal.

Cocchi said the process is secure to prevent any of the collected drugs being recirculated or misused. 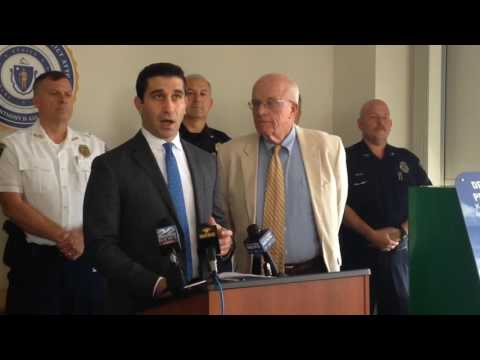 Items from a drop-off box at a police station are sealed in a container and then weighed. There is no inventory for the types of medication deposited, he said.

But at each stage of the process, from the police to the sheriff and then to the incinerator, the container is weighed. Before it can be disposed off, all three recorded weights have to match. If the amounts differ, the people who signed off on the weight along the way have some explaining to do.

“It’s a very strict chain of custody,” he said.