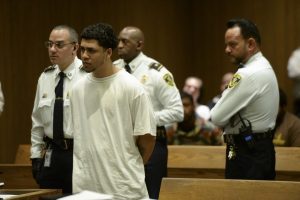 SPRINGFIELD — A 19-year-old West Springfield man on Tuesday in Hampden Superior Court denied an involuntary manslaughter charge in connection with an April shooting death in that city.

Roberto Santiago is accused of fatally shooting Delilah Santiago, 18, of Holyoke, on April 10 at his residence at Hillcrest Arms Apartments, 25 Highland Ave. Bail was set at $100,000 cash.

Sharleen Santiago, the victim’s sister, on Tuesday in Hampden Superior Court denied a charge of misleading police in the matter, said James Leydon, spokesman for Hampden District Attorney Anthony Gulluni. She was released on personal recognizance.

Roberto Santiago, 19, pleaded not guilty to the fatal shooting of Delilah Santiago, held

Leydon didn’t have information about the nature of the relationship between Roberto Santiago and Delilah Santiago.

Roberto Santiago pleaded not guilty to a murder charge April 12 in Springfield District Court, but a Hampden Superior Court grand jury indicted him on the lesser charge of involuntary manslaughter. That replaced the murder charge.

The indictment alleges that Roberto Santiago engaged in wanton and reckless conduct and by such conduct caused the death of Delilah Santiago.

Santiago was arrested April 10 at Bradley International Airport in Connecticut after law enforcement officials learned he was trying to board a flight. He had purchased a ticket to San Juan, Puerto Rico, according to Gulluni’s office.