More by Jim
By Patrick Johnson, The Republican
April 11, 2017 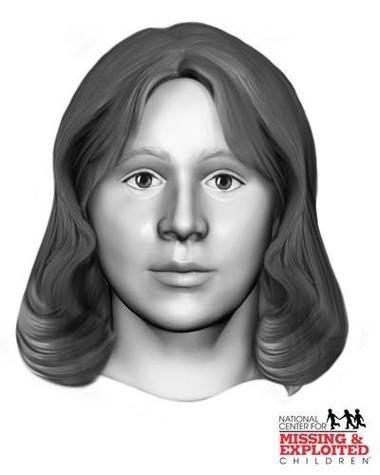 A forensic artist drawing of the victim in a 1971 Jane Doe case from Oregon. New testing shows the woman may have spent time in the Northeast.

The National Center for Missing and Exploited Children announced Tuesday that new testing on the remains of an unidentified young woman found in Oregon 45 years ago indicate that she may have been from the Northeast.

The Jane Doe case dates back to Aug. 19, 1971 when some hikers found the remains in a wooded are off Redwood Highway, mile post 35 in Josephine County, Oregon.

It was determined the remains were those of a white female between the ages of 14 and 25 and with auburn hair.  No one has ever come forward to identify the deceased, and the woman’s identity remains a mystery to this day. Since then, she has been known only as

Oregon is on the other side of the county, but new testing indicates there may have been a connection to the Northeast states

Isotope analysis, which looks at the chemical make-up of the remains at the atomic level, found evidence the woman could have spent time in the northeast before moving westward into the Great Lakes region and ultimately to the Pacific Northwest.

The Center of Center for Missing and Exploited Children is working with police in Oregon to help find the woman’s identity. The agency is distributing information on the case and a forensic artist sketch of what the woman may have like, in the hope of triggering someone’s memory.

On August 19, 1971 the body of an unidentified female was located in a wooded area off of Redwood Highway near Mile Post 35 in Josephine County, Oregon. The recovery location is near the Oregon-California border.Based on the condition of the remains, it is believed that she had been deceased for several months.

The decedent, often referred to as Jane “Annie” Doe, is believed to be a white female between 14 and 25 years of age. She had auburn brown colored hair. She had crooked teeth, slightly buck toothed with four fillings in her molars. She was found wearing a pink and beige waist length coat with a belt and 6 pink buttons, a tan long-sleeved turtleneck blouse with a neckline zipper, a pair of Wrangler jeans (size misses 13-14 slim) and a pair of square-toed brown leather shoes with gold buckles.

Also found was a Mother of Pearl ring with the letters “A L” scratched into the surface. Another ring was found near the body and is described as a regular “friendship” band with diagonal decorative chevron-like scoring along the band. The ring is silver in color, size 6 1/2. 38 cents in coins was found in the Jane Doe’s left rear pocket. The oldest coin was from 1970. A decomposed map of Northern California camping facilities was found in her right rear pocket.